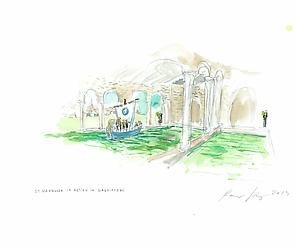 Luhring Augustine is pleased to announce that Ragnar Kjartansson´s S.S. Hangover, 2013 will be featured in the 55th International Art Exhibition: The Encyclopedic Palace, curated by Massimiliano Gioni. The exhibition will run from June 1 to November 24, 2013 at the Giardini and at the Arsenale.

For The Encyclopedic Palace, Kjartansson has created a performative kinetic sound-sculpture, S.S. Hangover, consisting of a sailing ship adapted by the artist and a composition for six brass instruments.

A Wagnerian tableau of sorts, Kjartansson’s S.S. Hangover will sail between two landings in the canal in the Arsenale. The boat will be manned by a brass sextet continuously playing a piece by composer Kjartan Sveinsson that he created specifically for this kinetic sculpture. The hemicyclic sailing of the sound of horns, trombone and tuba results in a stereoscopic effect. The boat will drop off the musicians one at a time, with each left to play alone on the pier as the boat sails away with the rest of the musicans still playing onboard, only to be picked up a round or two later and replaced by another musician in a continuous loop.

S.S. Hangover, a haphazard hybrid of Greek, Icelandic and Venetian ship design, was originally a 1934 wooden fishing boat from Reykjavík; it has been transformed by the artist into a remake of a theatrical boat that appeared on dry land in a swanky party scene in the film Do You Remember Last Night (1935). Kjartansson’s contribution to The Encyclopedic Palace was conceived specifically for the Arsenale’s historical shipyard, Gaggiandre, where the Venetians impressively pushed countless newly built ships afloat insuring the Venetian Empire’s rule in its golden years.

S.S. Hangover will be in active motion daily for the entire duration of the Biennale. The hours of the performance are as follows:

For more information about The Encyclopedic Palace please visit the Venice Biennale website.

For further information about the artist please contact Kristen Becker at kristen@luhringaugustine.com or 212.206.9100.