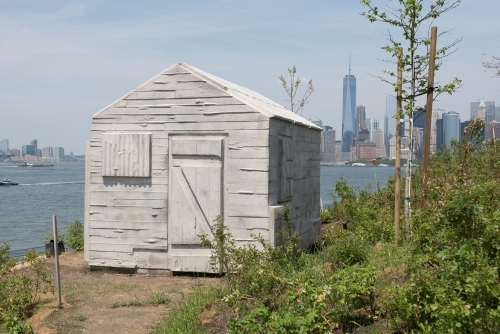 Cabin continues the artist's interest in producing evocative sculptures of negative spaces. In this case, Whiteread has created a concrete cast of the interior of a simple cabin, a place suggestive of retreat and introspection. Sitting modestly on a hillside overlooking New York Harbor, the sculpture creates a sense of contemplative quiet and distance from the bustle of the city across the water. Strewn around the cabin are numerous bronze casts of discarded objects including bottles, cans and other refuse, some of which were sourced on the Island itself. Over time, the surrounding vegetation will grow along the sculpture’s surfaces, causing it to blend into the hillside, and contributing to its appearance as a weathered, secret hideaway. Cabin is the first major permanent public commission in the United States for Whiteread, and her first public art installation in New York since Water Tower in 1998.

Cabin is located on Discovery Hill, one of the four Hills on Governors Island, and will be on view this season daily from July 19–September 25, 2016, Monday-Friday 10am-6pm, Saturday-Sunday 10am-7pm. Designed by acclaimed Dutch landscape architects West 8, the Hills are the culmination of the award-winning Governors Island Park and Public Space Master Plan. Rising 25 to 70 feet above the Island, the Hills offer an extraordinary experience of art, play, and views.